If I haven’t mentioned it earlier, my interest in history is ultimately, people – the normal, real people who may or may not be remembered after they are gone.  People like most of my ancestors, and quite likely me.  Most people are interested in the upper names, the people “of name”, but I am more interested in the “all other men” in the quote.  This leads me down some pretty strange paths at times.One of the areas I research is the Tulsa Race Riot, and related things.  Recently I ran across the “Federal Report on Vice Conditions in Tulsa”, and thought I’d share that here, with pictures of some of the locations mentioned.  My comments are in green.

5.  Summary of conditions:  Vice conditions in this city are extremely bad.  Gambling, bootlegging, and prostitution are very much in evidence.  At the leading hotels and rooming houses the bell hops and porters are pimping for women and also selling booze.  Regarding violations of the law, these prostitutes and pimps solicit without any fear of the police, and they will invariably remind you that you are safe in these houses.

102 North Boulder Street.   Entrance in rear.  Madame a well built woman, and two girls rooming here.  Was directed by the madame to the front room facing North Boulder Street, for improper relations with  girl about thirty years old.  Her price $3.00.

Over 322 East First Street.   The Madame not being in, three girls “hustling” here. Was solicited by a light haired girl to go to bed.  This girl’s price $3.00; She is about twenty-two years old.

The  1921 City Directory  lists this as  “Bessie Phillips, Furnished rooms”.

320 1/2 East First Street.  The Madame told me her girl was out, and instructed to return later and hire a room, and she would have this girl come to the room; also being told that the girl’s price was $3.00.

An amusing note:  324 (or 326) East First is the site of the infamous “May Rooms”, which was Tulsa’s longest running brothel, in existance from the 30s until Madame Pauline Lambert  (nee Clara Palmer) died in 1979.

20 1/2 East First.  One Madame and one girl.  This girl is about seventeen years old, who told me she makes good money here, and also “hustles” on the streetsl her price to go to bet $4.00.

405 1/2 East First Street.  Rooming House.  I was solicited by a young girl, very slender.  Going upstairs, I was taken to her room.  The Madame, Maud Fleming, asked no questions.  The girl’s price was $3.00.  This same house was raided by the police about two hours  afterwards, for gambling.  Two gamblers were shot, one dying a few hours after.

The  1921 City Directory  lists this as  “Loose-Wiles Biscuit Co”.   I have to say that “loose wiles” is a dandy name for a brothel.  Next  door, in the old Tulsa Paper Company, is now McNellies Pub.

Empress Rooms, East First street near Main.   The madame told me  to wait a minute, later directing me to a room in a rear of house.  In the room were three girls, one of them remarked to take my pick.  Price $3.00.  The madame offered to let a room if I picked up a girl on the streets.

The Empress rooms aren’t listed in the 1920 City Directory.  I assume from the address that they are around this location: 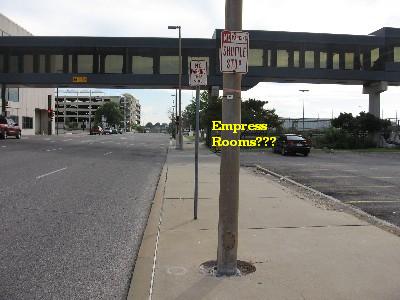 Queen City Rooms, Detroit near East First Street.  Five inmates rooming here.  The madame was out when I called, but was solicited by a woman about thirty years old to go to bed.  She informed that the madame and four girls were out riding horses.  This house is over a livery stable.

This would be the Queen city livery stable at 110 S. Detroit, run by Thomas Miller.  It’s pretty much where the garage is here:

Forbes Hotel, East Archer street, corner North Boston.  I called here in the afternoon.  Four girls were scrubbing floors, cleaning rooms, etc.  I inquired for a room, and was told by a young woman (not the madame) that they were all taken, but if you want a girl you have got the right place, and then telling me that her price was $3.00.

Central Hotel, 15 1/2 North Main Street.  The madame (Mrs. Francis Watson) told me that she had four girls rooming here that they were “hustling”.  She then called a very heavy set woman who was sitting in the rear of the hallway to me.  This woman called “Bessie”; she telling me her price was $3.00.  While there I saw four men gambling with cards in the main hallway.

Wisteria Rooms, 1084 East Second Street.  Three Girls, the colored porter, calling a girl for me.  Her price $3.00 to go to bed.  The porter insists upon a fee of one dollar.  I saw two other girls here that are “hustling”.

Next, the north side of the tracks…

Below are colored houses:

505 East Archer street:  Having “Rooms” sign on house.  I saw a piano just inside the entrance, ad an old colored woman as the madame, and four inmates.  Was solicited by a young colored yellow woman to go to bed.  Price $3.00.

503 East Archer street:  “Rooms” sign on house.  Two young girls solicited me on doorstep to come inside and go to bed; their price being $2.00. 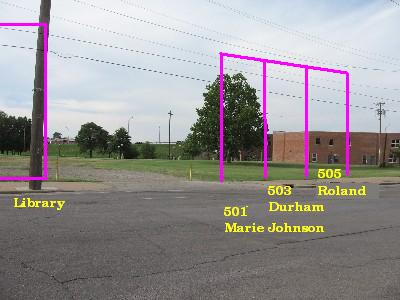 420 East Archer street, Midway Hotel.  I was picked up by a colored girl standing outside on the sidewalk and requested to go to her room No. 22, her price being $2.00.

7.  Street conditions, etc.  The streets surrounding the Frisco depot being worked and found bad.  Just an aside, this was the area that formed the main battle groundduring the race riot  only a month  after this report was written.  On East and West First street, especially on a Saturday evening, the porters at the Carlton (24 1/2 E), DeVern  (not found), and Imperial (118 1/2 E) Hotels stand in front of their entrances soliciting men to go upstairs with their “keen” women.  These hotels I had visited previously , and was solicited by each of them to go upstairs.  The prostitutes “hustle” on North and South Main, East and West First , Second, Third, and Fourth streets, later taking them men to their respective rooming houses.  I had seen eighteen solicitations upon the above mentioned streets by the women.  At the DeVern Hotel I saw a porter take three men upstairs within half an hour.  At the other hotels I mentioned, I did not see any men go upstairs with the porters.

8. Hotel conditions:  Very bad.  The above mentioned hotels I have classed as open houses.  All the hotels that have been covered I found prostitutes operating, or the proprietor would gladly let you a room for immoral purposes should there not be any women with rooms there.

At this point, the author lists 24 hotels (major and minor)  where girls could be ordered in for a fee.  As much as $10. at the Hotel Tulsa.
There are also 5 houses where rooms could be rented for immoral purposes.

14.  Number of prostitutes seen in all places during investigation; 64.

14A.  Total number of prostitutes seen in open houses; 25.

16.  Total number of prostitutes seen in rooming houses; none.

I saw eight prostitutes at the Armory Dance Hall, whom I had also seen in open houses or upon the streets above mentioned.

21.  Total number of prostitutes seen in cafes, restaurants and cabarets; none.

22.  Total number of pimps seen; 19 (all colored porters or bell hops at the above mentioned hotels).